The save function is deactivated on it, other then that it is identical to the normal version.

Hope you enjoy it :)
The biggest obstacle to great software is lack of motivation. Motivate each other!
Instead of reinventing the wheel, we should put chariot wheels on jet planes!
mrmixer
Simon Anciaux
881 posts
#16156
Glyphin alpha 2 Trial
2 years ago
It crashes on startup for me (out of the box). Windows 7 64bit. 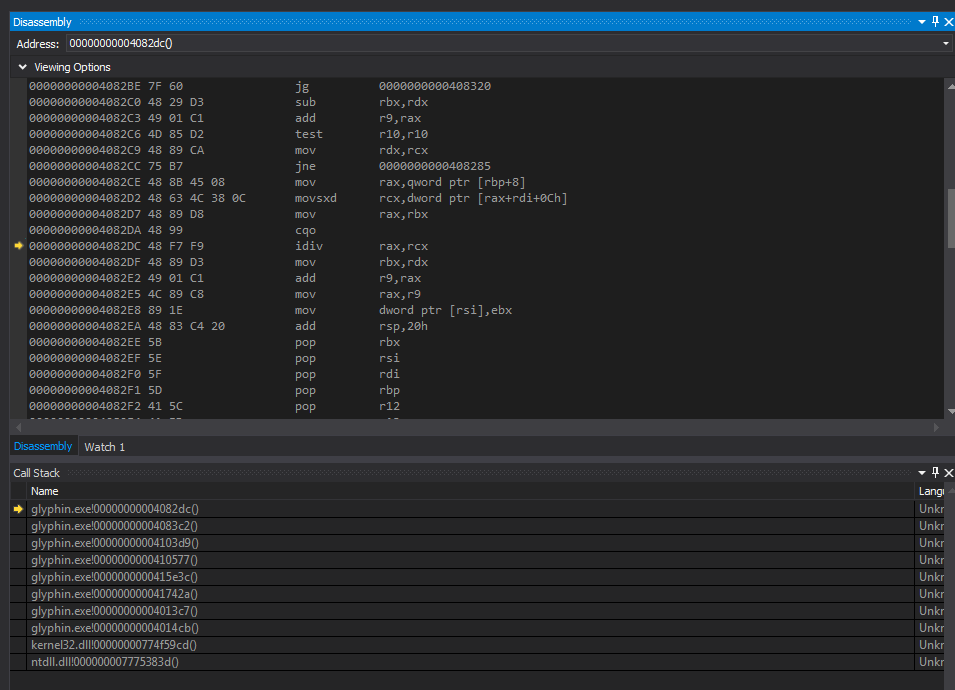 Telash
Mikael Johansson
101 posts / 1 project
#16158
Glyphin alpha 2 Trial
2 years ago
Hopefully it is fixed now :) The font path was wrong, had no issues on my machine as I had the fonts on both places.
Please let me know if the issue remains.
The biggest obstacle to great software is lack of motivation. Motivate each other!
Instead of reinventing the wheel, we should put chariot wheels on jet planes!
mrmixer
Simon Anciaux
881 posts
#16175
Glyphin alpha 2 Trial
2 years ago Edited by Simon Anciaux on Sept. 2, 2018, 3:21 p.m. Reason: typos
It's working. I didn't encounter any problem with my keyboard layout which is good.

How can I try the inline error display feature ?

Here is some feedback:
- "Dialog box" aren't visible enough in my opinion.
- The search box doesn't display properly the first time after resizing the window.
- Open file should default to the current path or a default path. Leaving it empty isn't great in my opinion especially since the dialog box isn't that visible.

- The handling of the Open file dialog is odd.
--- Having '.' seems counter productive. Since tab will add that by default to the path, as it's the first entry, is double counter productive.
--- '..' should erase the last folder in the path instead of adding "../" to the current path (I would prefer to not have those and have a key combo to erase the last directory in the path e.g. control + backspace).
--- It was not obvious to me that tab would auto complete (I was expecting return/enter). I expect "tab" to autocomplete when things are inline, if it's choosing from a list, I expect "return".
--- I would like tab to cycle between all possible autocomplete solutions instead of completing the current one and going to the subfolder.
--- I don't like the fact that using the arrows to choose from the list also require to press tab to confirm the choice.
--- I would like to be able to customize the keys used in the list to move up or down.
--- It's weird that when you type the last letter of a file, there is a '/' appended at the end of the path
--- I find confusing that glyphin adds letters at the end of the path and that if I press enter it doesn't use them to open the file. For example, I have a folder with a file named "file.c", if I only type "file" in the open dialog, glyphin adds .cpp in the text box in gray, but if I press enter it will not open "file.c", it will create a new file named "file".

- There doesn't seem to be a way out of the change file menu without changing file.
- The scrolling on the change file menu doesn't work properly, it looks like the size is hardcoded.
- The ui for the switch file menu seem to be off-screen if there is enough opened file.
- You can open other dialog box (open file, search) while in the switch file menu.
- I find it odd that the open file and search dialog don't open in the active panel (they are always at the bottom left).
- At some point I managed to open a ton of files and I don't know how it happens. I believe it was by pressing enter while a folder path was in the open file text box. It opened files from subfolders but not all files, not sure what happened.
- Alt + up/down with selected text grows the selection.
- I would like to be able to customize the keys to move in a file.
- The default window size is weird.
- I can't bind to control + ,
- I don't know the use of the F9 thing at the top of the config file, but I would expect it to open a buffer with the result of the application that ran.

- After opening a file that contains lots of Chinese character, there are some problems with the text. If I move the cursor on the first line the cursor disappears. If I add any character on the first line, some text would appear just after the new character. The file was from the steamcmd tool: steambootstrapper_tchinese.txt in the public folder. You may need to perform an update to get the file.

- Got a crash while opening an existing cpp file and another while switching to a file (after opening a folder ?).

A personal opinion:
I think the trial version is useless because we can't try anything if we can't save a file. For example, if I want to test the inline error display, I would need to modify, save, compile and correct the error... So the trial without save isn't a good idea in my opinion. Saving a file is a function that a text editor can't be used without.
I think it'll be hard to get people to contribute to your Patreon. 4coder made it because Casey recommended it, and people in these forums that wanted to switch editor went to 4coder (I'm guessing, I have no data to back that up). Not that we can't still support you, but it's less likely. You would need some major feature to get people to switch from their favorite editor. I personally would be more incline in buying the editor once per major version (like 4coder on itch.io). But if you expect to make a living out of this, it's probably not going to be enough. And at the moment, there is not enough about glyphin to justify paying for it.
Telash
Mikael Johansson
101 posts / 1 project
#16177
Glyphin alpha 2 Trial
2 years ago
Thanks for the feedback. I will take it to heart :)

F9: just means that F9 will compile and run. (the settings file is kind of a mess for now)
So just change the text after COMPILE= and RUN= to what you use. You need gcc or g++ installed.

Then you should get inline bug reports.

Since you can not save in the trial, you need to make these changes in any other editor of your choice.
The biggest obstacle to great software is lack of motivation. Motivate each other!
Instead of reinventing the wheel, we should put chariot wheels on jet planes!
mrmixer
Simon Anciaux
881 posts
#16178
Glyphin alpha 2 Trial
2 years ago
The error reporting doesn't work for me. But I'm using clang on windows. CompileReport.txt contains the error but nothing happens in glyphin.


Also here is a gif of the problem with the cursor (the line that appears is the actual second line of the file):

Telash
Mikael Johansson
101 posts / 1 project
#16179
Glyphin alpha 2 Trial
2 years ago
Can you try to get a line compile error? Like for example remove the semicolon at test_matrix( )
The biggest obstacle to great software is lack of motivation. Motivate each other!
Instead of reinventing the wheel, we should put chariot wheels on jet planes!
mrmixer
Simon Anciaux
881 posts
#16180
Glyphin alpha 2 Trial
2 years ago

Doesn't work either.
← Back to index Log in to reply